In its latest market intel report, Chainalysis chief economist Philip Gradwell wrote that “investor whales” bought 77,000 bitcoin last week, an amount currently worth just above $3 billion. This is based on Chainalysis’s monitoring of on-chain data.

The market intel report concurs with The Block’s reporting that hedge funds and asset managers were buying the dip, particularly in bitcoin’s $30,000 – $35,000 range.

According to Chainalysis’s report, this price crash saw a considerable amount of bitcoin being moved on-chain at a loss. Gradwell stated that 1.2 million bitcoin was sent at a 5 – 25% loss, with 120,000 bitcoin moved at a 25% loss or worse.

“However, this was a smaller number of bitcoin sent at loss than in the late 2017 and mid-March 2020 price crashes, suggesting that last week was not the worst capitulation of holders in bitcoin’s history,” he said. 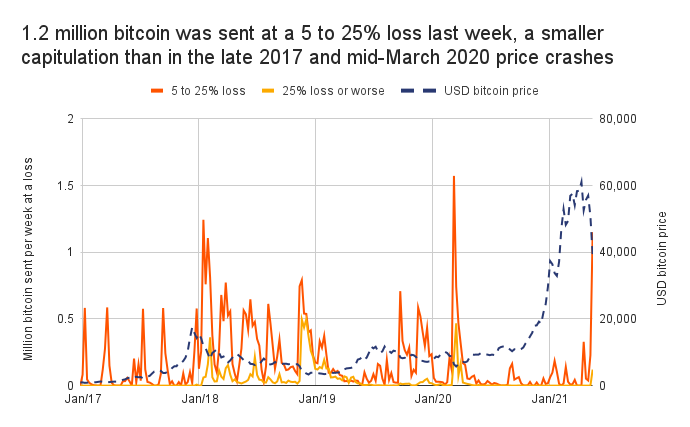 When measured in U.S. dollars, however, the losses stacked up. The report noted that $3.2 billion was sold at a loss last week, coins that had only been acquired 4 – 13 weeks earlier. In fiat terms, it was “the worst week ever for bitcoin investors.”

It was a similar picture for Ethereum. Last week witnessed the most amount of ether ever moved at a loss. The report stated 22.6 million ether was sent at a 5 – 25% loss. On the flip side, Gradwell noted that, “while people took losses on Ethereum, they were not extremely large in percentage terms.” 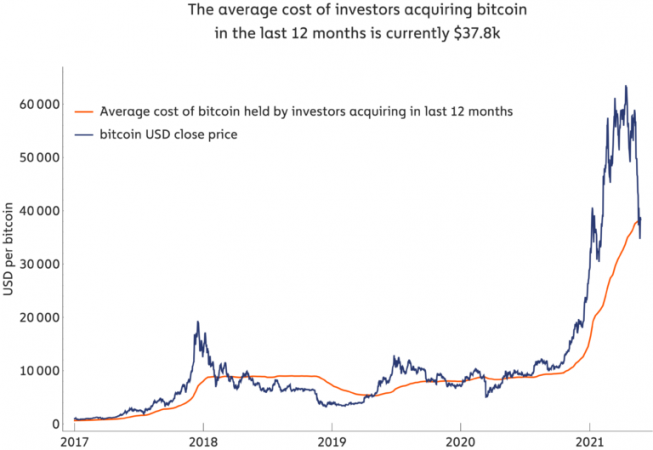 The economist said that historically, prices for both bitcoin and ether have often returned to this cost price and that it typically provides a floor, except for the crypto winter of 2018.

How Bitcoiners are Working With El Salvador’s Leaders

In less than 80 days, El Salvador will become the first country to declare Bitcoin as legal tender. To help advance this controversial plan, Bitcoin's flag-bearers have visited the country to speak with politicians, help the El Salvadorans and eye a profit.  British...

On June 21, the Ontario Securities Commission began proceedings against Bybit Fintech Limited.  The commission alleges that Bybit failed to respond to public statements requiring crypto exchanges to begin compliance talks with the regulators.  The OSC action is just...

Mad Money host Jim Cramer said he has sold almost all of his bitcoin. He cited the Chinese government’s crackdown on bitcoin mining and concerns over bitcoin’s role in ransomware attacks. Jim Cramer Worried About China’s Mining Crackdown and Ransomware, Sold Almost...