Twitter appears to be adding the ability to tip using Bitcoin

Twitter is seemingly trialling the ability to tip using bitcoin, per multiple reports. According to MacRumors, the current Twitter beta indicates that this service is being tested, while mobile developer Alessandro Paluzzi has leaked an image of what the service will look like.

According to the reports, the tipping function will use the Lightning Network to make smaller bitcoin payments. It will support custodial and non-custodial wallets. 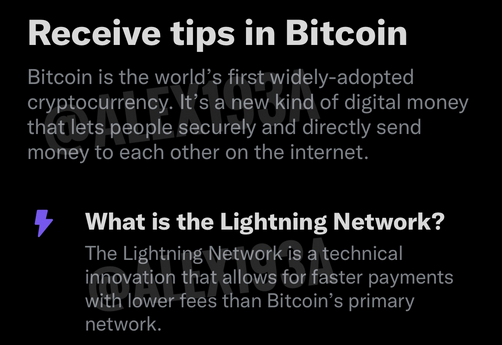 What appears to be shown in the Twitter beta. Source: Alessandro Paluzzi

Based on the leaked image, Twitter is clearly working closely with Bitcoin Lightning App Strike, and will use the service to generate bitcoin invoices. As a result, Twitter users will need a Strike account to receive tips.

In July, Twitter CEO Jack Dorsey implied that bitcoin would be coming to the Tip Jar, a service for making tips on Twitter. He added that it could also be used for its other products including Super Follows, Commerce and Subscriptions.

Dorsey’s other company Square holds bitcoin on its balance sheet and recently committed to building a bitcoin hardware wallet. Plus Square has its own crypto team, Square Crypto, which works on bitcoin development kits and other open-source code.

The Block reached out to Twitter for comment and will update this article if the company responds.

The world is still focused on the financial downfall of China’s real estate giant Evergrande and according to Chinese authorities have told the private sector to get “ready for the possible storm.” Reports show that even though the People’s Bank of China already...

Twitter rolls out bitcoin tipping for iOS users via Lightning, looks to NFTs for the future

After rumors swirled earlier this month, social media platform Twitter has officially rolled out its tips function worldwide — with a bitcoin integration included via the Lightning network. Clicking on the feature enables users to tip creators through third-party...

Bitcoin price rallied to $44,800 and takes aim at flipping the $45,000 level to support shortly after Twitter launched a new crypto tipping service. Bullish optimism is on the rise across the cryptocurrency market on Sept. 23 as prices continue to recover from this...