Bitcoin’s hash rate is on track to regain recent loss as miners in China’s Xinjiang province are gradually plugging in machines again.

Several local bitcoin mining farm operators shared with The Block that some – but not all – of their facilities in parts of Xinjiang have begun to regain power starting today. This development comes as a recent security inspection concludes region by region.

But since Xinjiang is a vast territory, the power resumption process will happen gradually before it can fully reach the level seen prior to the recent coal mine accidents.

Thomas Heller, a former director at Chinese mining pool F2Pool and now heads the business development at Compass Mining also shared on Twitter that “mining farms in Xinjiang are gradually turning power and machines back on from today. It has already started.”

Real-time hash rate data from mining pool APIs analyzed by The Block on a daily basis shows the network’s computing power has climbed up over the past 24 hours with a caveat that luck plays a bigger role in a relatively shorter timeframe.

For instance, the average hash rate decline among most bitcoin mining pools as of now is at 13% compared to the level before April 16. But the decline was around 20% as of Wednesday.

On the other hand, the overall hash rate percentage decline among Chinese mining pools was good news, at least for the past days, for overseas competitors like Slushpool or Foundry USA, both of which gained some market share this week. 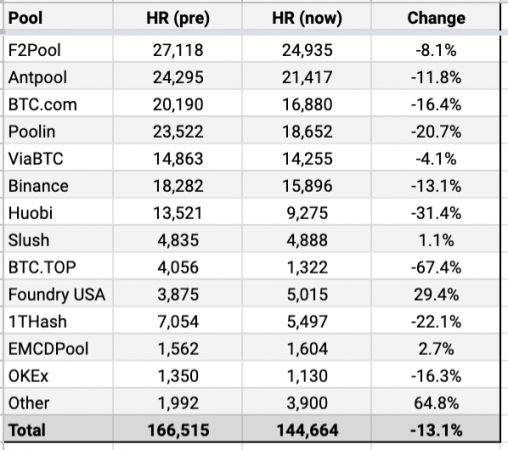 As a result, although the data centers in Xinjiang, including bitcoin mining farms, didn’t have security issues themselves, they had to shut down due to the power cut. Local farm operators said last week that they expected the inspection process to be completed in about a week.

China is currently in what’s called the dry season, which spans from October to May. During this period, there is limited hydro-power resources in the southwestern region of the country so a majority of the bitcoin miners would migrate to coal-based provinces such as Xinjiang.

As a result, bitcoin’s three-day moving hash rate after April 16 declined by 16%, data seen on April 18 showed. The seven-day moving average over the past week further extended the drop to around 20%.

Mustafa Yilham, who heads the overseas business at Bixin, one of the longest-running bitcoin wallet and miner firms in China, said this data also sheds light on how the hash rate dominance inside China has declined significantly compared to previous years.

“Right now in China, it’s still [the] dry season, so the majority of the mining operations (>80%) are still taking place in Xinjiang region,” Yilham said on Twitter. “So if estimated 80% of the mining in China was located in Xinjiang as of last week, and 80% of them were shut down and it only affected 20-25% of the network, that means hashrate in China is currently around 32-40% at most.”

That also means the power cut collectively caused Xinjiang miners a significant opportunity cost. With 20% of the global bitcoin computing power, for each of the days they had to shut down operations, they could have mined – in theory – one-fifth of bitcoin’s 900 BTC daily block subsidies excluding transaction fees.

South Korean authorities are intensifying their monitoring of phishing activity related to cryptocurrencies. The government has identified a record number of websites trying to obtain login details from crypto exchange users. Over 30 sites have been taken down in just...

Bitfarms, a publicly traded bitcoin mining firm, announced on May 7 that it had won approval to list on the Nasdaq Global Market. The timing of the listing is unclear at this time, though the firm said that it was moving "expeditiously" to "confirm Bitfarms’ common...

The price of Ethereum has jumped above $4,000 for the first time. The price of the second largest cryptocurrency by market capitalization climbed above the $4,000 level around 3:00 UTC on Monday just a week after breaking through the $3,000 level. It is changing hands...